Maverick educator seeks to change Israeli Arab world from within 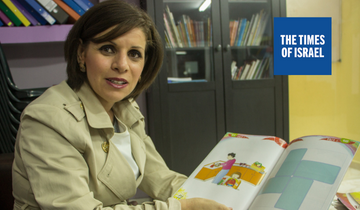 TIRA — The little girl’s name is Amal and she has a room of her own.

This might not sound revolutionary. But as the Arab-Israeli educator who dreamed up Amal says, “Whatever might be taken for granted in any other context, here it’s a revolution.”

Amal’s room appears on the first page of a book, “Where’s My Family?” meant to teach English to five-year-old Arabs. But for Dr. Dalia Fadila, as befits the holder of a PhD in literature, every image is a symbol. “It’s here to show individualism. Woman aren’t (generally) being looked at as individuals in the Arab community, entitled to their own rooms.”

The story of Amal and her progressive family — her father makes their sandwiches for school and the business suit-clad mother goes to work — is part of the curriculum being taught in Fadila’s latest success story, Q Schools. The idea is that while learning English, students also acquire progressive values and become citizens of the world. Working alongside an illustrator, Fadila conceived and wrote an entire series of Q School books, and over 2,000 students, ages 2-18, have studied her curriculum in five locations in Israel and Jordan in the past eight years.

The first Q school in Tira, began in 2008 with 30 students. This year, the schools are also operating in the northern Israeli Arab towns of Nazareth, Jaljulia and Tayibe, in East Jerusalem, in the West Bank city of Ramallah and, since 2012, in Amman, Jordan. In 2014, Fadila also founded a new bilingual preschool for ages 2-4 in Tira.

In Israel, the schools have grown with almost no advertisement. Rather, Q School founder and general director Fadila says the quality of its graduates’ English, and their subsequent success, have attracted parents. As for the growth into Jordan, that was the result of a Ted Talk she gave five years ago in Israel that caught the attention of Jordanian educators.